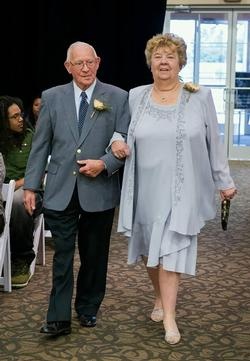 Barbara A. Saunders, age 79, of West Jefferson, OH, passed away at home on Saturday, July 8, 2017.  Born in Goshen, OH to the late Josiel and Raymond Goodwin, she was a graduate of St. Xavier High School in Cincinnati, OH.  Barbara is survived by her husband of 63 years, Jim Saunders, of West Jefferson; her daughters: Connie Atkisson of Flat Rock, MI, Patricia R. Morehart of West Jefferson, Nancy (Robert) Sands of Columbus, OH and Kymberly (Kenny) Kauffman of West Jefferson; her ten grandchildren: Aaron (Tiffanie) Atkisson, Alycia (Aaron) Morehart Alexander, Kristen (Bart) Kenney, Chad (Jessica) Morehart, Jeremy (Kelly) Sands, Shaun (Alicia) Sands, Nick (Brittney Laws) Sands, James (Jamie) Kauffman, Kyle (Lexi) Kauffman and Nicole Kauffman; her 19 great-grandchildren and her many friends.  Barbara loved her community.  She was a very active member and officer of the American Legion Auxiliary Unit 201, West Jefferson for 42 years.  For the past 25 years, she voluntarily planted and maintained the many flower beds around West Jefferson.  She was the current Treasurer of the Auxiliary Unit, having served for 20+ years.  Barb was currently serving on the FEMA Board for Madison County and was a past member of the Community Action Board for Clark, Madison and Union counties.  She had previously served as a Camp Fire Leader and, along with her husband Jim, served on the Camp Madilon Board.  Barbara was instrumental in organizing the Legion's food baskets and Toys for Tots in West Jefferson and, for many years, Barb and Jim led the effort to place American flags on the graves of veterans in five area cemeteries.  She spent countless hours volunteering at the Chillicothe VA Hospital and assisted with the annual poppy sales in West Jeff.  Her family will receive friends from 5:00-8:00p.m. THURSDAY, JULY 13, 2017 at the RADER-MCDONALD-TIDD FUNERAL HOME, 1355 West Main Street, West Jefferson, OH 43162 (614)-879-9222.  A Memorial Service will be held later at the American Legion Post in West Jefferson (time and date to be announced later).  If they choose, friends may make a memorial contribution to Barbara's favorite charities: Central Ohio Sheltie Rescue, P.O. Box 13072, Columbus, OH 43213 www.centralohiosheltierescue.com or to the Humane Society of Madison County, 2020  Plain City-Georgesville Rd., NE, West Jefferson, OH 43162 www.hsmcohio.org.
To send flowers to the family in memory of Barbara A. Saunders, please visit our flower store.