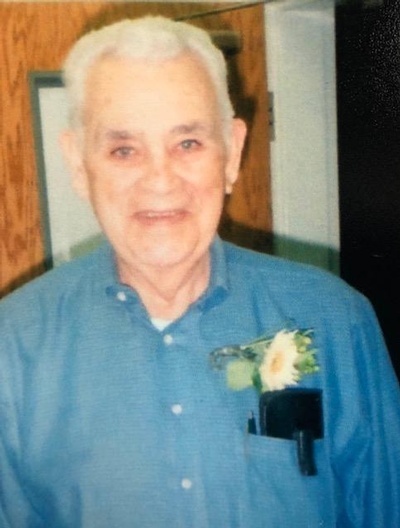 Charles A. Dodge, 90 of West Jefferson, OH, originally from Barre, VT passed away on January 6, 2018 in Lima, OH. He was born February 13, 1927 in Barre, VT. Charles was the son of Robert C. and Mary Ann (LaForest) Dodge. He graduated from Spaulding HS in Barre. He had retired from the Penn Central Railroad in Richmond, IN, and the Village of West Jefferson, OH. He served in the U.S. Navy and Air Force Reserves. He was a member of the West Jefferson American Legion Post 201, Aladdin Temple Shrine, Amvets, and the VFW where he was a Post Commander. Charles is survived by his daughters: Debra (Don) Crumbaugh of Lakeland, FL and Patricia (Paul) Crow of Lima, OH, son: Robert Dodge, of NJ, several grandchildren and great grandchildren. He is also survived by his siblings: Albert Dodge, William Dodge, Dora Lovely, Betty Owen and Ann Day. Besides his parents, he was preceded in death by 2 wives: Norabelle and Carol, son: Charles Jr., and daughter: Juanita Hoover, siblings: Robert Dodge, Gerry Duchaine, Carol LaCourse, and Julia Cecchinelli. Memorial Contributions may be made to Bridge Hospice in Findlay, V.F.W. of your choice or the Aladdin Shrine Temple. Family will receive friends at RADER-McDONALD-TIDD FUNERAL HOME 1355 W. MAIN ST., WEST JEFFERSON, OH 43162, Friday, January 12, 2018 from 11 AM-1 PM. A Masonic service will be held at 1:00 PM. Graveside services will immediately follow the visitation and Masonic service with Pastor Larry Baker officiating. Burial will follow in Hampton Cemetery in West Jefferson, OH. Please visit www.radermcdonaldtiddfuneralhome.com to leave the family online condolences.

To send flowers to the family in memory of Charles A. Dodge, please visit our flower store.