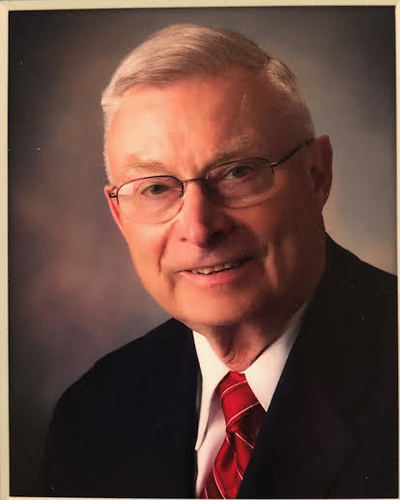 Charles S. “Pete” Kitchen, 83, of West Jefferson, passed away peacefully in the morning hours of Thursday, September 12th with Sue, his loving and devoted wife of 59 years, by his side.

He was born on Oct. 14, 1935 in Cincinnati, Ohio to Charles Stewart and Mary Plunkett Kitchen. He was a graduate of South Charleston High School and Bowling Green State University where he was a member of the Phi Delta Theta fraternity. He later attended and graduated from the Naval Officer Candidate School in Newport, Rhode Island. During his ensuing four-year tenure with the Navy, he served aboard the USS Elokomin AO-55.

He was the owner and operator of Kitchen’s Supermarket for 32 years. He was named as the Grocer of the Year by the Central Ohio Retail Grocers Association in 1990. Pete was thought of by many as a pillar of the West Jefferson community and he touched many lives through his work, political life and various methods of support throughout the years. In 2007, he was selected to serve as Grand Marshal of the Ox Roast Parade. He was also a member of the St. Simon and Jude Catholic Church, Republican Central Committee, Madison County Board of Elections and Huntington Bank Board of Directors.

Following his retirement, Pete enjoyed playing golf, traveling and spending time with his family. He also enjoyed spending time with his good friends at the West Jefferson VFW Post 7005, of which he was proud to be a member. He was a fan of West Jefferson High School football and following the graduation of his five sons, he continued to attend games until his health no longer permitted him to do so. He was named Booster of the Year in 1978-79 and Fan of the Year in 1992.

The family will receive friends on Wednesday, September 18, 2019 from 5:00 pm – 8:00 pm at the Rader-McDonald-Tidd Funeral Home, 1355 W Main Street, West Jefferson. According to his wishes, a Mass of Christian Burial will be held Thursday, September 19, 2019 at 10:00 am in Pete’s hometown of South Charleston, Ohio at the St. Charles Borromeo Catholic Church where he received his First Holy Communion, Confirmation, and married his beloved wife. Burial will follow at Pleasant Grove Cemetery near Springfield.

Donations in Pete’s honor can be made to the West Jefferson Scholarship Fund.

To send flowers to the family in memory of Charles S. "Pete" Kitchen, please visit our flower store.