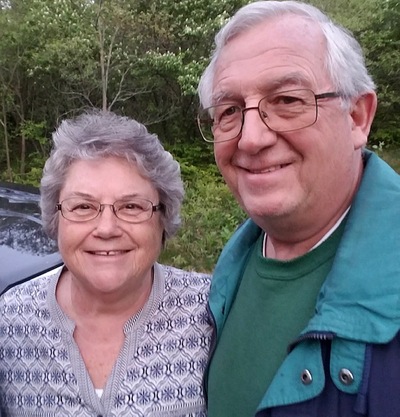 Darlyn Campbell Newman, age 74, of West Jefferson, was called home to her Heavenly Father on Friday, December 3, 2021.  She was born in Columbus to the late Mike and Eileen Campbell.  She was preceded in death by her parents, grandparents, Hoyt and Thelma (Blaine) Graves, and Edith Braithwait Forbis and Norman Campbell, an infant son and granddaughter Savannah Joy Newman.

Darlyn was unsurpassed in her support for her family and friends.  After marrying, she and Jerry moved to Nashville to start a family and work in the ministry.  Their lives had them ministering from Tennessee to Ohio.  After each tearful relocation, she longed to be back with their family and friends.  They returned to West Jefferson to work in Community Free Will Baptist.  She supported her church by being active in the ladies’ group, cooking for Wednesday Night Bible Study, bible studies, outreach, and retreats.

She was a faithful and strong woman - surviving three bouts with cancer.

Sunday dinners were special to her.  Dozens of family and friends gather each week to continue the tradition passed on to her from generation to generation. Sharing food, stories, love, and friendship with every person who entered her house was important to her.

Her love and dedication to her family would earn her a Ph.D. in Motherhood.  She was at every school or sporting event that involved her children - whether she was cheering, volunteering, or even playing. She loved to travel - OSU football or basketball, road trips with family, beach trips with church ladies. If it was zip-lining, dancing, working out, volunteering - she would be there for her children and grandchildren. She will be forever carried in her family’s hearts.

Family will receive friends from 4:00-7:00 p.m. on Monday, December 6, 2021, at the Community Free Will Baptist Church, 130 NE Plain City-Georgesville Road, Galloway, OH 43119 where her funeral services will be held at 11:00 a.m. Tuesday, December 7, 2021. A private family burial service will be held at Hampton Cemetery at a later date. In lieu of flowers please make a donation to the Community Free Will Baptist Youth Group.

To send flowers to the family in memory of Darlyn Campbell Newman, please visit our flower store.