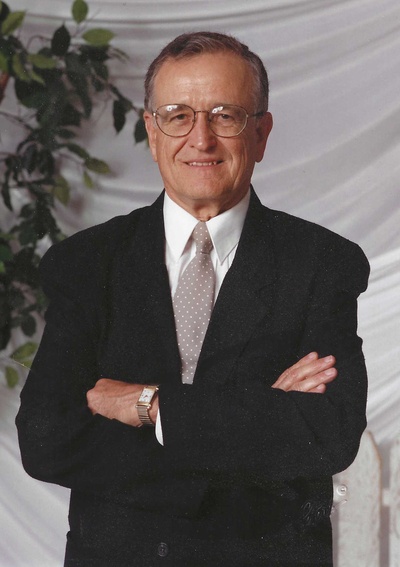 He was born on December 5, 1934, the second of four sons of Leo and Mildred Holland.

David was a 1953 graduate of West Jefferson High School. He received his Bachelor’s in Education from Otterbein University and his Master’s degree in Educational Leadership from Xavier University. David was a school administrator, teacher, coach and mentor to generations of students, many of whom later became his friends.  His teaching and coaching career began at his alma mater finally retiring after 44 years in educational administration. He loved his work, his family and in his last words to us he said “I lived the American Dream, I exceeded everyone’s expectations, even my own, and the love of my life did very well also as you see in my kids. I trust in God, I did my best and that has always been enough.”  The message, he was always preaching to all, just do your best!

David was an avid Ohio State fan and we believe the win on New Year’s Day was for him! He enjoyed the time he and Della spent watching the Buckeyes.  He also loved the West Jefferson Roughriders and was a faithful fan to the end. He was very involved in his home town and very happy to live his whole life there. After retirement he took up golf like a full time job!  He also spent much of his spare time doing outside work in his yard, going to the gym and walking on the track at West Jefferson High School.  David enjoyed being with his family and enjoyed the many occasions when all of his children, grandchildren and great grandchildren came to visit him and Della. We all feel blessed to have learned many valuable lessons from David the coach, teacher, mentor, husband, dad and grandpa.

He is survived by his wife Della Holland, of 66 years of marriage, his daughters, Cindy Rohletter, Debbie (Tom) Archakis, and Terry (Mark) Hutson, a son, Steve Holland and a brother Lee (Jo) Holland and leaves 11 grandchildren, and 7 great grandchildren  Preceded in death by his son, John Holland, brothers, Paul Holland and Gerald Holland.

Due to the COVID pandemic, it is with sad regrets that a celebration of his life is not possible. A private service will be held for family only. Burial will take place at Hampton Cemetery.

Checks may be mailed to:

To send flowers to the family in memory of David R. Holland, please visit our flower store.