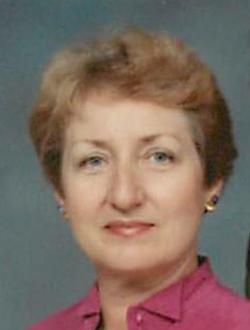 Diane Lucille Jasinsky (nee Sturgis) passed away in her sleep in the early hours of Saturday, December 17, 2016, at the age of 88. She was preceded in death by her husband, Alan. A 50-year resident of West Jefferson, after her husband's death Diane eventually moved to Crandall House in Worthington, Ohio where she received round-the-clock loving care until the end of her life.

Diane was born in Bellefontaine, Ohio on February 27, 1928. During the 1940s she was a member (with her sister and mother) of a professional singing trio, "The Sturgis Sisters", performing at the finest hotels in Columbus, Dayton, and Cincinnati. The Trio spent winters in Florida and continued performing at nightclubs and hotels in the Tampa-St. Pete-Clearwater area. During this time, Diane attended and graduated from Clearwater High School. She also attended St. Petersburg Junior College and Urbana Junior College.

Diane met her husband Alan, an industrial engineer and leader of the Alan James Orchestra, when in 1949 he hired her to sing for his dance band. After seeing Diane the first time, he said to another band member, "I'm going to marry that girl". When Diane got wind of this, she said, "like hell he is." The rest, as they say, is history.

Diane was a member of the West Jefferson United Methodist Church, where for years she was church organist and a founder of The Prayer Group. Over the years she had the privilege of playing the organ for the wedding ceremonies of many West Jefferson couples. Competitive by nature, family and friends often would find Diane and Alan in the heat of batttle -- either ping pong or billiards -- in the basement of their home on Center Street. Diane also was golfer and an avid swimmer and was a member of the Hilltop YMCA "50 mile club". Always full of energy, in later years she enjoyed bowling in daytime leagues and the annual city tournament, as well as the Pro-Am tournament where she bowled alongside professionals. She made many friends in the central Ohio bowling community.

An accomplished cook, organic gardener, musician, and friend to so many including every stray dog, Diane led an active and interesting life until her decline due to Parkinson's.

Services will be held Thursday, December 22 at 11:00 a.m. at Rader-McDonald-Tidd Funeral Home, 1355 W. Main St., West Jefferson. Friends and family are invited and may call at the funeral home on Wednesday, December 21 from 4- 7 PM. In lieu of flowers, donations may be made to Heartland Hospice Memorial Fund, http://heartlandhospicefund.org/.
To send flowers to the family in memory of Diane L. Jasinsky, please visit our flower store.