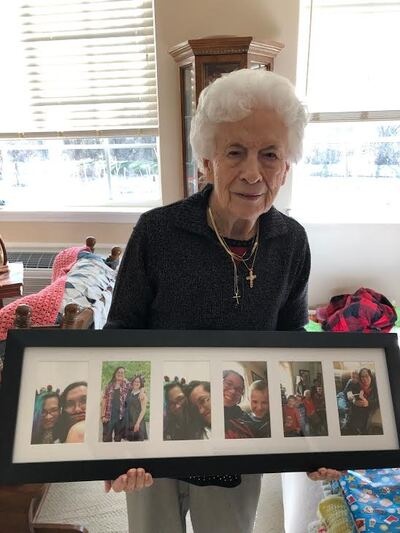 Dorothy J. Ball passed away on Thursday, June 18, 2020 at the age of 95.  She was born on July 12, 1924 to the late Wilbur and Lucille (Cox) Hollar in West Jefferson, OH.  On July 6, 1943 she married Glenn J. Ball and they were married for almost 60 years before he passed in 2002.  Dorothy and Glenn lived on Ohio Avenue in West Jefferson in the home that he and his brother, Alan, built.  Dorothy remained there until 2016 when she moved to Hilliard Assisted Living and Memory Care.  After she retired from the West Jefferson post office, Dorothy and Glenn spent many hours delivering Meals on Wheels and volunteering at the West Jefferson United Methodist Church Good Samaritan Food Pantry.  In addition to her parents, Dorothy was preceded in death by her sister Gladys Ball and her brother Wilbur Hollar, Jr., aunts and uncle.  Dorothy is survived by her son Larry (Donna) Ball, grandchildren: Matthew of West Jefferson, Melissa Kraus of Mumford, TN and Michael (Sandy) of Hilliard.  She was great-grandma to Krista Hause, Thomas Ball, Morgan and Logan Kraus and Owen and Olivia Ball.  She is also survived by dear sisters-in-law Mary Ball of London, OH and Betty Ball of Powell, OH, as well as several nieces and nephews.  Friends may call from 1:30p.m.-3:00p.m. TUESDAY, JUNE 23, 2020 at the RADER-MCDONALD-TIDD FUNERAL HOME, 1355 West Main Street, West Jefferson, OH 43162 (614)-879-9222 where her Funeral Service will follow the visitation and begin at 3:00p.m. with Reverend Ruth Pribe, officiating.  Burial will follow at Pleasant Hill Cemetery, West Jefferson.  Special thanks to the staff who provided special care for Dorothy at the Hilliard Assisted Living and Memory Care and also to caring people with Capital City Hospice.  In lieu of flowers, a memorial contribution to the Good Samaritan Food Pantry at West Jefferson United Methodist Church would be appreciated. Please visit www.radermcdonaldtiddfuneralhome.com to send condolences to the Ball Family.

To send flowers to the family in memory of Dorothy J. Ball, please visit our flower store.