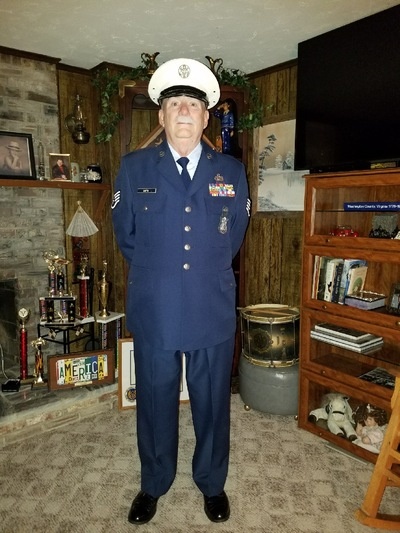 Edwin Jackson Smith (Jack), 73, of West Jefferson, Ohio, passed away at home surrounded by family on August 19, 2021, after his battle with cancer. Jack was born on December 30, 1947 in Charleston, WV to Charles and Margaret (Horton) Smith. He graduated from Stonewall Jackson High School and attended Beckley College before enlisting into the United States Air Force on November 7, 1967. He married Roberta (Scott) Smith November 9, 1968 before going to Vietnam. He served in The 377th Combat Security Police Squadron on Tan Son Nhut Air Base, Saigon Vietnam during The Tet Offensive December 1968 - December 1969. Upon completion of his military service, they relocated to Columbus, Ohio where they raised three daughters and he retired from General Motors. Jack had many talents and wore many hats. He was a poet, a fisherman, a cowboy, a rock hound, and a true American Patriot. He wrote many poems to his family, but focused on Veterans and military life. He even had one of his poems recorded as a song. He loved helping Veterans and his fellow brothers and sisters of the 377th SPS and VSPA. He received many awards and accolades from these groups, including the Warriors Medal of Valor from the VSPA. One of his most enjoyable times was being on the Honor Flight Columbus on May 18, 2019. He was a member of the Ohio Archeological Society and has an extensive arrowhead collection he unearthed throughout the years. Jack was also a member of SASS - Home of Cowboy Action Shooting. The Single-Action Shooting Society was created to preserve and promote the sport of Cowboy Action Shooting and he competed at many of their events. He is preceded in death by his parents, Charles and Margaret Smith, and granddaughter, Rebekah Stanley. He is survived by his wife Roberta(Jackie) of West Jefferson, daughters Jenni Smith of Fountain Hills, AZ, Laurie and John LaRock of Baltimore, Ohio and Sarah and John Stanley of Canal Winchester, Ohio. Grandchildren, Caitlin and Zac Gordon, Elizabeth LaRock, Johnny LaRock, and Jakhob Stanley. A Celebration of Life Memorial Service will be held on August 29, 2021 starting at 1:00 pm. Located at 565 Haymarket Road, West Jefferson, Ohio 43162. In lieu of flowers, please make a donation to Honor Flight Columbus Please contact us 614-284-4987 or Info@HonorFlightColumbus.Org to arrange a donation for our senior Veterans.

To send flowers to the family in memory of Edwin "Jack" Jackson Smith, please visit our flower store.