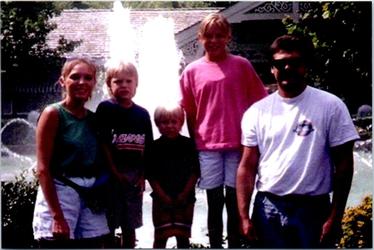 Jeffrey A. Snyder, 52, entered into eternal peace on May 12, 2017. His passing was sudden and he will be deeply missed by all who knew and loved him.

Jeff was born in Columbus, Ohio, to the late George and Nancy Sue Snyder on February 9, 1965. He attend FHHS and Paul C. Hayes Technical school, both from which he graduated in 1983.

Jeff was naturally gifted with the ability to repair practically anything. It was a rare occasion when he was met with a defeat by a vehicle, boat, appliance, plumbing, or even frozen well lines.

He was a firm believer in God, and was always willing to lend a helping hand to those in need. In his younger, and more vibrant years, he was known for his generosity with the less fortunate. During the Christmas season, it was not unusual to find him under the viaducts passing out gifts of food, clothing, and cash to the homeless.

Jeff loved hunting, fishing, camping, boating, football, Nascar, and watching his kids play at their various sporting events during their childhood. He was a loving and doting Pawpaw to his grandchildren, and was looking forward to attending events played by them as they became old enough.

Jeff is preceded in death by his middle child, Johnathon (age 7), his parents George and Nancy Sue Snyder, one of his older brothers, Steven Snyder, as well as one of his best buddies, Robert Garcia.

The family will receive friends, Thursday May 18, 2017 at Rader-McDonald-Tidd Funeral Home 1355 W. Main St., West Jefferson, Ohio, 43162, from  5:00 pm.-9:00 pm. with Prayer service at 7:00 pm. Mass of Christian Burial will be held at Saints Simon and Jude Catholic Church, Friday, 11 am, May 19, 2017. Following the Mass there will be a luncheon provided by the Women's Guild. Cremation will follow with private family inurnment to be held at St. Joseph Catholic Cemetery at a later date.

In lieu of flowers, financial donations can be made to Lifeline of Ohio in his memory by mailing to:

Lifeline of Ohio
Attn: Contributions
770 Kinnear Road
Columbus, Ohio 43212 - You can visit their website for details @ Lifelineofohio.org under "Making a financial contribution"

Rader-McDonald-Tidd is honored to service the Snyder family.

To send flowers to the family in memory of Jeffrey A. Snyder, please visit our flower store.