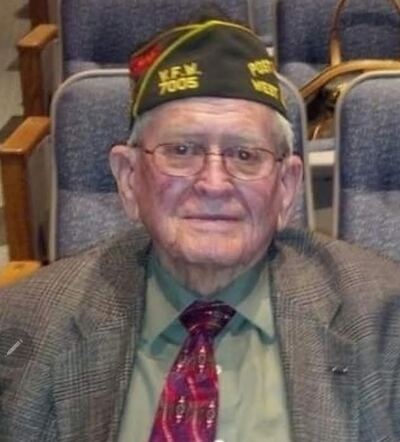 He was preceded in death by his parents, his loving wife of 66 years, Rowena Borders, son Claude Borders, and five brothers and three sisters.

Raymond was a proud World War II Army Veteran. He valued his service highly and attained the rank of sergeant/ As part of his service, he was a communication and squad leader with the 301st Infantry Regiment and the 94th division in England, France, and Germany. He received the Purple Heart, World War II Victory Medal, Army Combat Infantry Marksman Medal, The EAME Campaign Medal with 3 stars, and Good Conduct Medal.

Raymond worked at American Standard for 20 years, and then International Harvester from which he retired.

He was a member of the Church of God and was a charter member of VFW Post 7005 of West Jefferson.

The Funeral Service will be at the funeral home on Thursday, January 20, 2022, at 11:00 A.M., with Pastor George Jordan officiating. Interment will follow at Pleasant Hill Cemetery, West Jefferson, OH.

To send flowers to the family in memory of Raymond L. Borders, please visit our flower store.