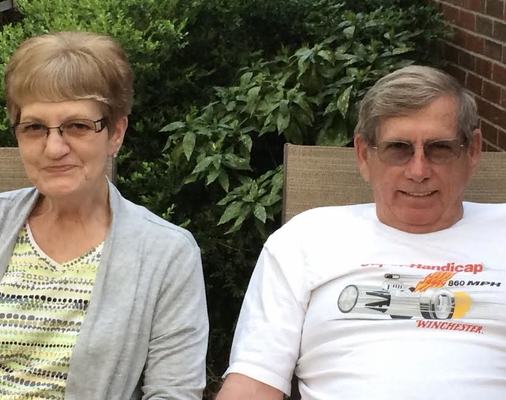 Sandra M. (DeCarlo) Drake, 71, of London, Ohio, died at home on the morning of March 31, 2020. Sandy was born September 15, 1948 to father Blaze Theodore DeCarlo and mother Eleanor Mae Belyea in Stamford, Connecticut. Raised in Presque Isle, Maine, Sandy graduated from Presque Isle High School in 1966. Shortly after graduation, she began working as a secretary at Metropolitan Life. Sandy loved spending time with her mother. They would often go roller skating, play bingo, and go dancing. One evening they went to a place in Limestone, Maine called the Cross Roads. There they met Sandy’s future husband, Robert E. Drake, an Air Force Crew Chief from Portsmouth, Ohio and stationed at the nearby Loring Air Force Base. Soon the couple moved to Ohio, married, and had twin daughters Tara and Tracey. Her daughters were two of the loves of her life. She enjoyed spending time with her family, going to the movies, shopping, and out to lunch. She loved to bowl and play bingo. In their retirement, Bob and Sandy enjoyed going out to lunch or dinner, often times they would frequent Red Lobster, one of Sam’s favorite restaurants. Sandy helped to raise her family and held several jobs throughout her life in London. She worked for a number of years as a cashier at Kroger’s, she was a teller at a local bank, and worked most recently as a Walmart greeter. Sandy loved interacting with the public and it seemed as though she never knew a stranger. Nanny took great care of her other loves, her grandsons. She enjoyed spending time with them, babysitting them, and attending their ball games. Jacob, Zane, and Kaiden gave her many years of pleasure and happiness. She looked forward to watching them grow into young men. Mom/Nanny was the type of mother/grandmother who would offer you the shirt off her back and still spoil you rotten. Her family’s hearts are heavy with this unexpected loss. Sandy is survived by her loving husband of 50 years, Robert Drake of London; Tracey (Drake) Ratliff (daughter), Kevin Ratliff (son-in-law), Jacob Payne, Zane and Kaiden Ratliff (grandsons), Makayla and Kamryn Ratliff (step-granddaughters) all of London; Tara (Drake) Stafford (Daughter), James Stafford (son-in-law), Jacob Stafford (step-grandson) of Summerville, South Carolina; and Jamie Burns (half-brother) of Presque Isle, Maine. A loving Daughter, Sister, Wife, Mother, Nanny, and Friend, Sandy was preceded in death by Theodore Blaze DeCarlo (father), Eleanor Mae (Belyea) Burns (mother), Peter DeCarlo (brother), and Grace Drake (mother-inlaw). *Due to the coronavirus (COVID-19), a Memorial Service and further arrangements will be set for a later date. The Rader-McDonald-Tidd Funeral Home, 1355 W. Main St., West Jefferson, OH 43162, assisted the family. Please share your favorite memory of Sandy by visiting www.radermcdonaldtidd.com or send your condolences to her family.

To send flowers to the family in memory of Sandra M. (DeCarlo) Drake, please visit our flower store.