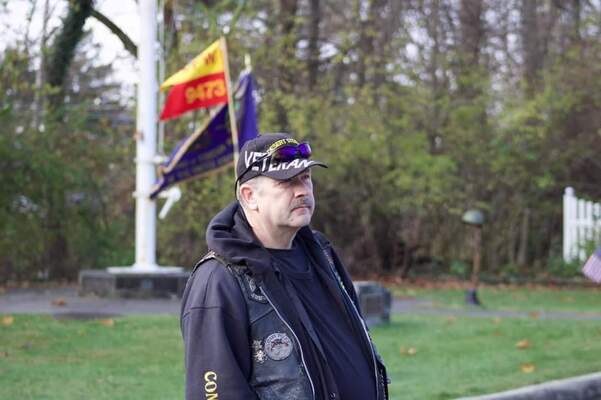 Steven D. Jones “Caretaker”, age 57, of London, Ohio, passed away Tuesday, December 14, 2021 at OSU Hospital in Columbus, Ohio.  Steven was born at Grant Hospital in Columbus on February 15, 1963, the son of Robert Steven Jones and Rose Gertrude (Rudolph) Jones.  Steven worked at the Franklin County Sheriff’s Office for 25+ years.  He was also a veteran of the United States Army and served in Desert Storm, among countless other assignments.  Steven is survived by his wife Maria K. (Adkins) Jones and children Christopher L. Adkins, Katharina Jones, Christine M. Soter, Kelsea B. Lawver, Heather R. Soter, and Jomanda FL. (Tyler D.) Anderson.  Steven is also survived by his siblings: David M. (Paula) Jones, Chris (Tom) Burg-Newberry, Timothy C. (Linda) Jones, and Patrick M. Jones.  He is survived by his grandchildren Dakota L. Soter and Nancie M. Anderson, as well as many nieces and nephews and his K-9 companion Snuggles.  Steven was received in Heaven by his parents Robert and Rose Jones.  Steven was a hero in life in many ways: from serving his country in Desert Storm to helping stranded couples on the side of the road.  The impact he made in the lives of many was significant and always good.  Steve had many interests in life such as riding the heaviest motorcycle in the world along with all the people who love him.  He loved to protect peoples’ lives as well as their hearts.  He became a hero even in death when he donated life-saving organs to multiple people who received a Christmas miracle.  Steven is the hero each and everyone of us needed and he became that hero we needed and saved each and everyone of us.  For some of us, he was the dad we never had, the friend who listened, the husband who cared when others did not, and the friend who saved our lives.  To each of us, he was different, but he saved us all.  Steven D. Jones “Caretaker” will always remain a hero and light in our lives.  He will never truly be gone.

Please visit www.radermcdonaldtiddfuneralhome.com to share your memories of Steven and to send your condolences to his family.

To send flowers to the family in memory of Steven D. Jones, please visit our flower store.